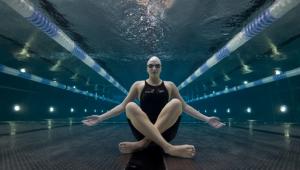 Double Olympic Champion Rebecca Adlington has entered her final training phase as she prepares to defend her 400m and 800m freestyle titles in London next month.

The Mansfield swimmer has been in excellent form all year. She qualified for Team GB in impressive style at the British Gas Swimming Championships at the London Aquatics Centre in March, setting the fastest time in the world this year for the 800m freestyle with a mark of 8:18.54. She’s also ranked second fastest in the world for 400m freestyle with a time of 4:02.35 set in March.

In the Barcelona leg of the Mare Nostrum series on 2nd June, Adlington won gold in the Women’s 800m Freestyle with an assured performance and a championship record of 8:19.86.

Adlington will compete in the 200m freestyle at the British Gas ASA National Championships in Sheffield on 20th June where she is expected to set a time to put herself in contention for a 4x200m freestyle relay spot. She has already ruled herself out of competing in the individual event in London.

Though Britain’s top swimmer has secured both her individual slots for London, there are still 14 places up for grabs in 11 different swimming events at the British Gas ASA National Championships.

Adlington has been chatting about her hopes and preparations ahead of this summer’s challenge, the contenders in the final battle for qualification in Sheffield and who to watch London next month.