A Third of British Adults Generously Donate Food Over Christmas

Brits prove their generosity over the Christmas period, as almost a third of the British have donated food to vulnerable people in need.

Despite the chaos and excitement of the festive period, almost a third (32%) of the British public have remembered vulnerable people in need by generously donating food to those in need across the country, according to a new survey published today.
The survey also reveals the generosity across the Britain, as the North West comes out on top as the most generous region (39%), ahead of Wales (38%), South East (37%) and Scotland (37%).

The survey goes on to show that more females (38%) have donated than their male counterparts (26%), while the youngest 18-24 age group is the most generous (38%) when it comes to food donations in the lead up to Christmas.
Food poverty continues to be a serious issue across the UK despite the economic recovery, as figures published by the Trussell Trust last week showed the number of people helped by food banks in the first half of the 2014-15 financial year is 38% higher than numbers helped during the same period last year.

Food donations to the Neighbourhood Food Collection benefit a range of people across the country, with donations going to either FareShare, a food redistribution charity, or food banks charity The Trussell Trust. Tesco provides a 30% top up to the charities based on the collective weight of donated goods.

To date, the campaign has collected 15.3million meals for people in need since 2012, and the target this year is to provide more than 20million meals. The 15.3 million meals includes the 30% top-up, permanent & local collections, plus surplus food provisions. Neighbourhood Food Collection relies on and is bolstered by volunteers.

Tesco is calling for customers to go instore to donate food to designated food collection points. Follow @Tesco for the latest news and use #everycanhelps to find out more about the initiative. Tesco will also be raising money for the FareShare and the Trussell Trust through the sale of special Christmas hats and cards this year.

Lindsay Boswell, CEO of FareShare, said: “Sadly food poverty affects a large number of people across the UK and we are now providing food to 32% more charities than we did six months ago. From homeless hostels to breakfast clubs, women’s refuges to luncheon clubs for older people, these frontline organisations need food more than ever, so we’re thrilled to partner with Tesco on the Neighbourhood Food Collection again this year. This campaign enables us all to help in a simple practical way, as every item of food donated will make a difference to vulnerable people in our community”

David McAuley, Trussell Trust Chief Executive, says: “In just six months Trussell Trust foodbanks have given 3 days’ food to almost 500,000 people, including over 175,000 children. Redundancy, illness, benefit problems and family breakdown are some of the reasons why people go hungry. Increasingly, people on low-incomes are living on a financial knife edge where even a small crisis can lead families to face hunger. As winter begins to bite, many will be forced to make tough choices between eating and heating, and thousands will struggle to put any food on the table on Christmas Day. Foodbanks are gearing up to meet the growing need over the festive season and we’re excited to team up with Tesco once again to work on Neighbourhood Food Collection for a fifth time. Over 90 percent of food given out by foodbanks is donated by the public, so we’re reliant on people’s generosity. It’s incredible to see over a third of the UK now supporting their local food charity, and we’d urge people to keep giving.”

Greg Sage, Community Director at Tesco, commented: “It’s encouraging that people still think food poverty is a serious issue that needs to be tackled, and so many have donated to food banks as a result. This our fifth Neighbourhood Food Collection, and it’s hugely important that we dig deep and do what we can to help people who are in need this Christmas.
“This year we want to break records and provide more meals for people in need than ever before. Our customers can donate food at Tesco stores right across the UK all this week and weekend.” 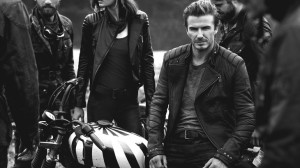 A Hundred Reasons to Laugh

A Hundred Reasons to Laugh

I read that a child laughs 400 times a day on the average, while an adult laughs only 15 times. Which puzzles me – what do you think the children are laughing at?

During one particularly dark period of my life I didn’t laugh even 15 times a day. Not nearly. For a variety of reasons, ranging from anxiety in my personal life to overwork and exhaustion, I was depressed. I may not yet have recognized it as depression (later I did), but now I can see that the signs were there.

My self-loathing surfaced once when I found myself driving alone on a cold Spring afternoon to spend a couple of days with colleagues on a work-related planning session. “I don’t have time for this!” I said out loud, and berated myself for not saying no. I was leaving my spouse to contend with children by herself while my daily work piled up in my absence. I felt submerged by an ocean of problems, professional and personal, with no chance of finding any way out. Everything looked bleak.

I met my colleagues for supper the first evening. To my surprise, we sat around the dinner table telling funny stories. We related real-life incidents that had happened to each of us. I had to admit, even in my despondency, that it was good to laugh. And those turned out to be some of the funniest stories I had ever heard! My anxiety melted as I relaxed and I found myself laughing hard – harder than I’d laughed for years.

The next day we worked, but we also played. We invented games using whatever recreational equipment we could lay our hands on. The sheer fun of playing, something else I hadn’t done for far too long, awakened something within me I thought I might never feel again.

The following day I returned home and I felt better than I had in months. Though it eventually took a lifestyle change to lift the depression for good, laughter became a key ingredient of that change. I determined then and there that a therapy of laughter would become a permanent part of my life. I’ve held to it, and have found that regular and hearty laughter is essential if I want to maintain inner peace and good health.

I had discovered a great truth about laughter – it is good for the body, the mind and the spirit. It’s a natural stress reliever. Have you ever laughed so hard that you doubled over, fell off your chair, spit out your food or wet your pants? (Yes, I’m not proud to say, I have.) You just cannot maintain muscle tension when you are laughing.

Author Norman Cousins used to say that laughter is so beneficial for your body that it is like “inner jogging.” Numerous studies have shown that laughter is good for your heart, it boosts your immune system and promotes overall good health.

The good news is that you are not limited to 15 laughs a day. You’re allowed hundreds of laughs. What might happen if you doubled the usual adult rate and tried to laugh 30 times today? Can you do it? You’ll probably notice an immediate difference in how you feel.

Then try to laugh 50 times a day. By this time you will begin to notice an improvement in your relationships.

But don’t stop there. What if you could find 100 reasons to laugh every day? You can do it by surrounding yourself with people you feel good around, looking for humor in daily life, taking a minute to remember what’s funny and even keeping a journal of whatever makes you happy.

Find 100 reasons to laugh. You are bound to feel better, you will cope with problems more effectively and people will enjoy being around you.

Besides unhappiness, what do you have to lose?

Do You Believe In You?

Did you know that Albert Einstein could not speak until he was four years old and did not read until he was seven? His parents and teachers worried about his mental ability.

Or that Beethoven’s music teacher said about him, “As a composer he is hopeless”? What if young Ludwig believed it?

When Thomas Edison was a young boy, his teachers said he was so stupid he could never learn anything. He once said, “I remember I used to never be able to get along at school. I was always at the foot of my class…my father thought I was stupid, and I almost decided that I was a dunce.” What if young Thomas believed what they said about him?

When F. W. Woolworth was 21, he got a job in a store, but was not allowed to wait on customers because, according to his boss, he “didn’t have enough sense.” I wonder if the boss was around when Woolworth became one of the most successful retailers of his day.

When the sculptor Auguste Rodin was young he had difficulty learning to read and write. Today, we may say he had a learning disability, but his father said of him, “I have an idiot for a son.” His uncle agreed. “He’s uneducable,” he said. What if the boy had doubted his ability to excel?

A newspaper editor once fired Walt Disney because he was thought to have no “good ideas.” The great Italian tenor Enrico Caruso was told by one music teacher, “You can’t sing. You have no voice at all.” And an editor told Louisa May Alcott, just a few years before she wrote the classic novel Little Women, that she was incapable of writing anything that would have popular appeal.

History will long praise each of these famous people, but what became of their critics? Nobody even remembers some of their names, which is all that need be said.

But what if these young people had listened to those critical voices and became discouraged? Where would our world be without the music of Beethoven and Caruso, the art of Rodin, the ideas of Albert Einstein and Thomas Edison, the imagination of Walt Disney or the literary contributions of Louisa May Alcott? As it was so accurately put, “It’s not what you are, it’s what you don’t become that hurts.” (That from Oscar Levant.) What if these people had not become what they were capable becoming, had not done what they actually could have accomplished, just because they were discouraged by people who couldn’t see them for what they were?

We all have potential and, whether you realize it or not, your desire to do or be more than you are is your best indicator of future success. Others may discourage you, but the most important voice to listen to is your own. Do you believe in you?

Still the voices of your critics. Listen intently to your own voice, to the person who knows you best. Then answer these questions: Do you think you should move ahead? How will you feel if you quit pursuing this thing you want to do? And what does your best self advise?
What you hear may change your life.
Steve Goodier
__________
By Steve Goodier www.LifeSupportSystem.com 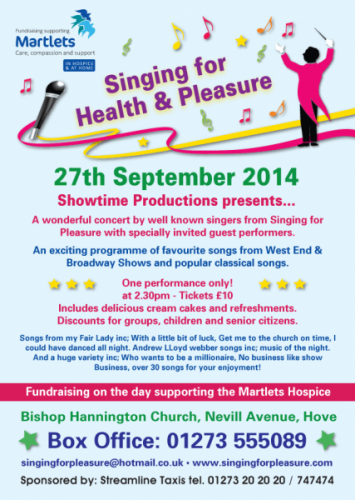 A wonderful concert by well known singers from Singing for Pleasure with specially invited guest performers.

Songs from my Fair Lady inc; With a little bit of luck, Get me to the church on time, I could have danced all night. Andrew LLoyd Webber songs inc; music of the night. And a huge variety inc; Who wants to be a millionaire, No business like show Business, over 30 songs for your enjoyment!

Fundraising on the day supporting the Martlets Hospice