Keira Knightley In His Exploration 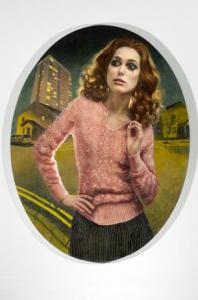 Keira Knightley, who collaborated with Pearson Wright on her debut art film ‘Maze’ (2010), appears in this new series of paintings. She’s posing, with one hand on her hip, but instead of the picture-perfect image that we are used to, there is a sinister yellow backlight thrown by the suburban buildings around her and mascara runs down her cheek.

These paintings consider the motif of the smile and its traditional role in the history of portraiture, as well as its use in advertising, popular culture and the mass media as a signifier of a successful life. Pearson Wright looks at the transformation which takes place both privately and publicly when a camera is pointed at a subject and what the artist describes as “the collective, hysterical conspiracy to appear happy [which] blights our visual world with endless images of overt disingenuousness”.

Stuart Pearson Wright (b Northampton 1975) was the winner of the National Portrait Award (2001) aged just 26. He lives and works in London.