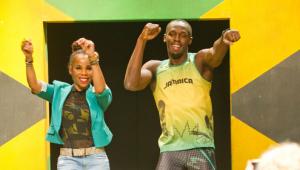 The designs will be worn by the entire team (men and women), including three-time Jamaican Olympic gold medallist, fastest man in the world and PUMA athlete Usain Bolt.  PUMA’s partnership with Marley, the eldest daughter in the Jamaican family dynasty, underscores the brand’s long-time commitment to the Caribbean nation, with its rich cultural heritage, global music contributions and its unparalleled dedication to Athletics.

“It is truly an honor to design this collection for my home country and my home team,” said Cedella Marley.  “It’s not even a dream come true because it’s something I never dreamed would be possible. I ran track in high school in Jamaica and I’m still a huge fan of Jamaican Athletics, so to have a role in creating the outfits for our Olympians is a thrill. I admire what PUMA has been doing in Jamaica over the years and the Marley family has the same type of give-back philosophy. I think this partnership is going to be legendary.”

Staying true to PUMA’s DNA of sportlifestyle, the collection incorporates high-tech fabrics and silhouettes engineered to enhance the performance of the athletes hailing from the fastest country in the world—Jamaica. Taking inspiration from the vibrant colors and patterns of the Caribbean nation as well as the African influences that have come to characterize that country, Cedella Marley’s unique designs are sure to make the world take notice in the summer of 2012.

“I can’t think of a better person to design our Olympic outfits than Cedella,” said Usain Bolt. “PUMA got that right…hooking up with a legendary Jamaican. She’s a great designer but also carries on the spirit of our nation through the legacy of the Marley family. It’s going to be inspirational to run in London with that energy surrounding me.”

PUMA’s Olympic wear will be accompanied by a lifestyle collection of apparel, footwear and accessories which will be available at PUMA retail stores globally in June 2012.