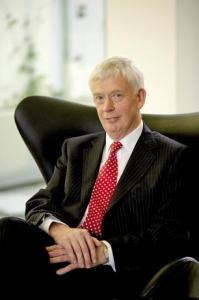 Today, Saturday 10th December, Louis Walsh confirmed in The Times UK that he has had a hair transplant procedure.

Dr Collins commented today – “Louis Walsh has decided to let it be known to the public that he has had a hair restoration procedure, carried out here at Hair Restoration Blackrock. Like James Nesbitt he has spoken about his hair surgery to try and encourage other men who have hair loss issues to seek proper advice regarding their concerns.

When Wayne Rooney made it known that he had hair transplant surgery carried out in the summer of this year, he did a huge amount to remove the stigma that was associated with hair loss and hair restoration surgery.

The general public frequently interpret hair transplantation as a cosmetic ‘vanity’ procedure. Nothing can be further from the truth as it brings about an improvement in self-esteem and self confidence, and also an inner contentment. To give you an idea of the extensiveness of hair loss, a few stats: 30% of men at 30 are affected, 40% at 40 and 50% at 50.

We would like to congratulate Louis Walsh on his ongoing success with the X Factor.”

HRBR is based in Blackrock Co. Dublin, Ireland, and is Europe’s only dedicated purpose built hair transplant clinic. Dr Collins consults in Dublin and London.

Hair Restoration Blackrock (www.hrbr.co.uk) is a specialist hair transplant clinic founded 8 years ago by Dr. Maurice Collins at the Blackrock Clinic in Dublin. Maurice Collins is an Ear, Nose and Throat (ENT) surgeon by training with 25 year experience at the Blackrock Clinic in ENT. He is a Fellow of the Royal College of Surgeons London, Dublin and Edinburgh. His two surgeon colleagues are also fellows of the Royal College of Surgeons (UK and Ireland). In 2007 HRBR moved to a dedicated purpose built facility at Samson House in Dublin.

Dr Collins’ interest in hair transplant surgery started eight years ago. Dr Collins has trained and studied internationally in this specialist subject with some of the best experts in the world.  Dr Collins and his team regularly attend, and participate in, the annual conferences of the International Society of Hair Restoration Surgery (ISHRS) and the European Society of Hair Restoration Surgery (ESHRS).  Dr Collins contributes to the ISHRS Hair Transplant Forum International bi-monthly newsletter and was named ‘Surgeon of the Month’ in May/June 2007.