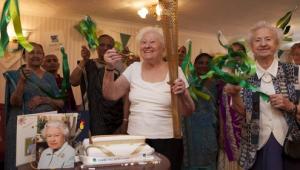 To mark the special day, Diana held a communal exercise class for the residents of the block of retirement flats in which she lives and was later presented with a cake by her friends. Diana is set to run with the torch on Day 68 of the Olympic Torch Relay, just 2 days before the torch arrives to light the cauldron at the Olympic Park during the Opening Ceremony of the London 2012 Olympic Games

In the below footage, Diana gives her thoughts on reaching 100, her reaction to receiving her letter from the Queen and looks ahead to running with the Torch in late July