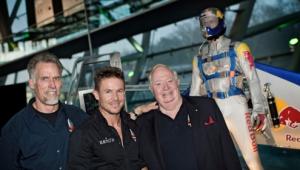 LONDON, UK – WEDNESDAY 25th – THURSDAY 26th APRIL 2012: Felix Baumgartner, the Austrian BASE jumper aiming to break the speed of sound during freefall from the edge of space, has arrived in London as he makes final preparations for his record attempt later this year in Roswell, New Mexico, USA.

Fresh from the successful completion of a 71,581 ft. test flight last month, Felix now has his sights set on his final jump (120,000 ft.) which will see him attempt to break the 52-year-old world record for the highest ever freefall.

Joining him on his London visit is Colonel USAF (Retired) Joe Kittinger, the man who has held the world freefall altitude record since 1960. Felix and Joe will also be joined by Art Thompson, Technical Project Director of Red Bull Stratos, who heads up the team of scientists, meteorologists and engineers who have spent five years developing the project.

On March 15th, Felix successfully completed a test flight to an altitude of 71,581 ft. in a capsule attached to a helium balloon. After a 90-minute ascent he stepped off the platform, and proceeded to freefall for three minutes and 33 seconds, reaching a top speed of 364.4mph, before deploying his parachute at 7,890 ft. above sea level. Just over four minutes later, he landed safely 30 miles away from the original launch site in Roswell.

The test flight represents a major landmark for the project, marking the first time that the manned Red Bull Stratos capsule has crossed the Armstrong Line (approximately 62,000ft.), where low atmospheric pressure causes liquid to boil in the unprotected human body. It has also enabled Felix to freefall from more than twice the height of his previous personal best of 30,000 ft. whilst experiencing stratospheric conditions similar to those he is likely to experience when he makes the final record attempt.

Felix’s world record attempt will take place in Roswell, New Mexico and is currently scheduled to launch in the summer of 2012.