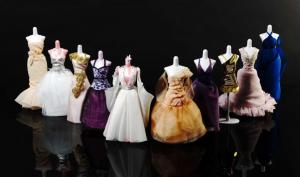 Queens of the ballroom Alesha Dixon and Alex Jones have tied in a poll on the best ever Strictly Come Dancing costume. Now a budding designer and graduate from Chelsea College of Art and Design, Beth Parry has recreated the top ten Strictly outfits on a girls’ fashion toy by crafting the stunning dresses on mini mannequins.

The other top costumes included 2010 champion Kara Tointon in a sparkly peach dress that she danced the American Smooth to and the dress Destiny Child’s Michelle Williams wore when she danced the Waltz with Brendan Cole in the same series. Meanwhile, Holly Valance, who was voted off with Jones in this year’s semi final came eighth with her gold sequinned Cha Cha Cha dress that she wore for the show opening.

The top ten Strictly outfits were:

2. Alex Jones’ white Paso Doble dress from the Dracula story worn in the Halloween special this series (10 per cent)

3. Kara Tointon’s sparkly peach dress she danced the American Smooth to in 2010 series Final (9 per cent)

5. Jo Wood’s sequinned ball gown for the Strictly promotional pictures in the 2009 series (7 per cent)

7. Ola Jordan, purple animal print number she danced the Foxtrot to in 2009 (6 per cent)

8. Holly Valance’s gold short Cha Cha Cha dress she wore in the first episode of the current series (6 per cent)

9. Christine Bleakley’s pink ballgown she danced the Waltz to in 2008 (6 per cent)

10. Flavia Cacace’s purple gown she danced the Tango to with Russell Grant in this year’s series (4 per cent)

The designs were made using the new Harumika Evening Gown Set, which has been a hit with fashion students as well as young girls designing their own ball gowns and party dresses. Since its launch in 2009, Harumika has gone from strength to strength with sales up 115% in 2011 versus 2010.1

Designer Beth Parry comments, “Strictly Come Dancing offers fantastic inspiration for designers with the glitz and glamour in the show, week in week out. The designers on the show have huge budgets and time to prepare each outfit, but with the Harumika collection it is possible to recreate these beautiful costumes on a miniature scale”.

Girls product manager at Bandai, maker of Harumika Vicki Elmer comments, “The designs options with Harumika are endless and we love seeing budding fashionistas using our wonderful sets to recreate dresses worn by celebrities, such as those who have appeared in Strictly Come Dancing. We are delighted with how well Harumika has performed this year and are excited about our plans to develop the range in 2012.”