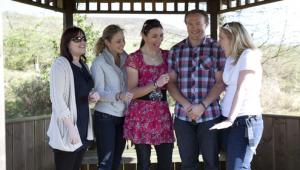 Sarah Storey Attributes Her Success To Her Circle of 5

Despite 37% of all UK adults thinking that their success is down to their own merits, over a third (38%) think it is mostly down to the core people in their life.

Sarah Storey, Paralympic cyclist and Links of London ambassador, believes that there are five core people in her life which have impacted and been invaluable to her progress in becoming a leading gold medal athlete. Sarah is supporting Links of London’s ‘Circle of 5’ campaign, which suggests we rely on a core group of 5 people to be successful.

Sarah Storey, seven times gold medal winner at the Paralympic games and twice British national track champion, commented: “Every successful person needs people behind them to drive them – I don’t know where I’d be without my friends, husband, trainers and parents. They push me to go that little bit further, inspire me and help me escape from it all when I need to. Without them I definitely wouldn’t have won my medals or be competing again this year.”

Dr Rob Yeung is a psychologist and researcher on success. Dr Yeung believes that the role each of the 5 people plays, falls into particular categories:  Someone who inspires you, supports you, mentors you, someone you can escape with or confide in.

Dr Yeung said: “Many of us like to think that our own success is based on how we perform, but without valuable people in our lives – core people around us who support us – we may not achieve as much as we aspire to.”

Adding to this, the research commissioned by Links of London shows that 91% of all UK adults also look to family and friends, rather than famous people when finding role models.

Links of London are inviting the nation to recognise their own ‘circles of 5’ and to celebrate and reward these 5 important people with a talisman of unity and celebration.  They have designed the Team GB band as part of their Official Jewellery Collection of London 2012 and Team GB.  The Links of London ‘Circle of 5’ campaign encourages us to give the core 5 people in our lives a Team GB band as a thank you for aiding our successes.  A red and blue woven band with a silver plaque engraved with Team GB, this band is a great way for you and your own ‘circle of 5’ to get behind the nation ahead of the Games and circulate a feeling of support and success.