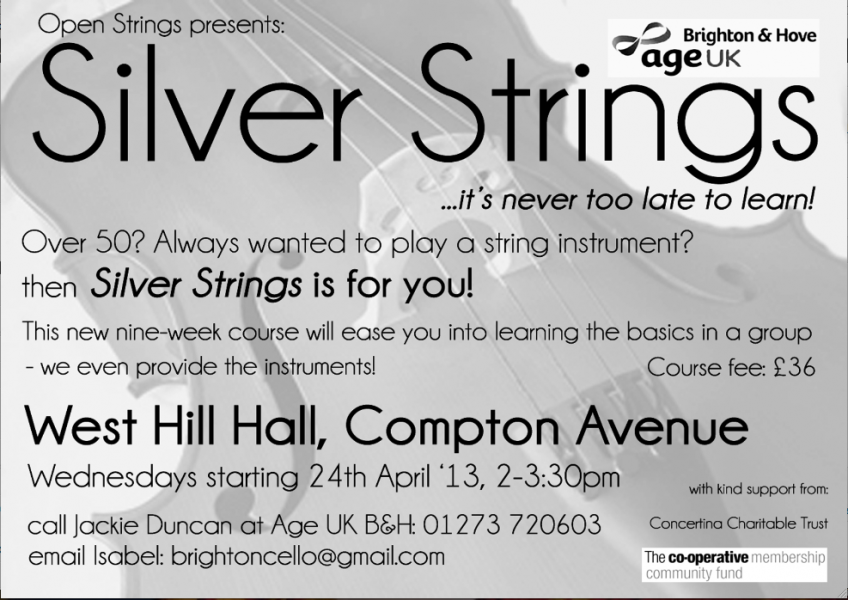 Learn to play a string instrument! 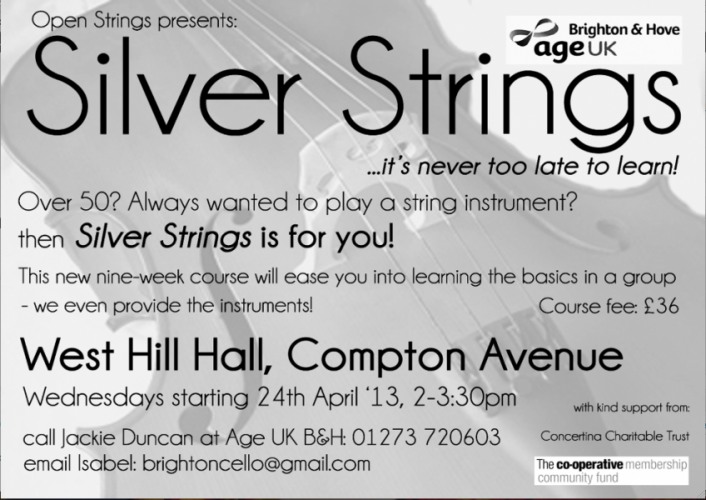 Over 50? Always wanted to play a string instrument?

Then Silver Strings is for you.

This new  9 week course will ease you into learning the basics in a group
-we even provide the instruments!

21 is the second studio album by English singer-songwriter Adele. Released on 21 January 2011 in the UK and most of Europe, and on 22 February 2011 in North America, the album was named after the age of the singer at the time of its production. While it shares the folk and Motown influences of her debut album 19, also named after the singer’s age, 21 was further shaped by the American country and southern blues music Adele encountered during her 2008–09 North American tour. Her second album on the subject of a break-up, 21, like its predecessor, was composed in the aftermath of the singer’s separation from an unnamed partner, and explores various themes of anger and revenge, heartbreak, self-examination, and forgiveness.

The majority of the album’s production was handled by Grammy Award-winning American producer Rick Rubin, while additional producers included Jim Abbiss, Paul Epworth, Fraser T. Smith, Ryan Tedder and Dan Wilson. Attracting critical praise for its vintage authenticity, the lyrical depth of the songs, as well as Adele’s vocal performance, the album was seen as an artistic improvement over her debut. Preceded by lead single “Rolling in the Deep“, which became a worldwide number-one hit, 21 debuted atop the UK Albums Chart with first-week sales of 208,000 copies, and peaked at number one in over nineteen countries,  including Canada, Australia, Germany and Ireland. In the U.S., the album debuted at number one on the Billboard 200 chart, selling 352,000 copies in its first week.

Following a highly praised performance of the album’s second single “Someone Like You“, at the 2011 BRIT Awards, the album maintained its number one position in the UK for eleven consecutive weeks, and, as of July 2011, amassed eighteen total weeks at number one. The album has been certified 10-times platinum by the British Phonographic Industry (BPI), denoting domestic shipments in excess of three million units, and in the U.S., topped the Billboard 200 for twelve non-consecutive weeks, shifting three million copies so far. A third single, “Set Fire to the Rain“, attained success across several European territories. The success of 21 helped to revive sales of 19, which ascended to new chart peaks within the top ten in New Zealand, and the top three in the UK, Ireland, and Australia, despite its release over three years ago. 21 also broke a number of chart records, its eleven-week stint at the top of the UK Albums Chart becoming the longest consecutive number-one for a solo artist. Ranked as the best-selling album of the year so far in both the UK and the U.S., 21 also became the all-time best selling digital album in both territories. As of September 2011, worldwide sales for the album is estimated at ten million copies.