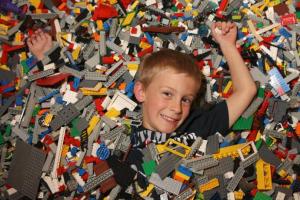 While boys might prefer playing with their friends than the fairer sex, experts say socialising with girls is good for their health and future prospects.

A new report by leading child psychologist, Pat Spungin, analyses the way children play together and reveals that young males who mix with females have more chance of developing the soft skills modern society prizes.

The research, commissioned by LEGOLAND Discovery Centre, Manchester, reveals playing with girls can have a positive effect on boys’ learning; enabling them to perform better at school and work.

Dr Spungin, a leading commentator on child development in the UK, found mixed sex socialising had advantages for females too – helping them acquire more traditionally ‘male’ skills like heightened spatial abilities and awareness.

Her work documents the way genetic patterning and learned behaviours combine to create what we view as male and female play.

These ways of enjoying toys dictate how and what the sexes learn – defining future roles and capabilities.

Dr Spungin highlights research into the brain activity of children as young as three months, showing how males and females are primed to enjoy and tackle different tasks.

So while boys build towers and bridges, boosting their spatial, logic and maths skills, girls like dollies and make-believe, leading to a more advanced sense of empathy and language.

Mixing the two has positive results for everyone and she is advising parents and teachers to look at less segregated play times.

As she says: “What humans inherit is just a starting point. It’s the interaction of nature and nurture that makes us what we are.”

“When different sexes play together then each is able to learn from the other be quite creative as a result.”

“Girls build up their spatial skills and boys their social and emotional skills while both are having a good time.”

Now bosses at the LEGOLAND Discovery Centre are hoping to put Dr Spungin’s theory to the test – by calling on girls to join their teams of budding builders.

The Trafford Centre attraction is looking for primary school children to become part of its existing Junior Construction Panel, currently made up of six to ten-year-old male LEGO® fans, and road-test its new collections and events.

An appeal was launched to find the team last year but despite region-wide media attention and thousands of entries, no girls applied.

Now bosses hope the new search will prompt a wider range of responses.

LEGOLAND Discovery Centres marketing manager Rachael Lockitt explains: “As Dr Spungin’s research shows it really is very important for boys to play alongside girls, as well as with their peers, and enjoying uni-sex toys like LEGO is a great way to do that.

“We’re looking forward to seeing what difference having male and female members will make to the feel of the Panel – and to seeing what the girls enjoy building the most.  We have plans to develop our product offering for girls and are keen to get our new Junior Construction Panel members on board ASAP to involve them in the process.  The boys will get involved too as we hope some of them will enjoy the new area as much as the girls.”

Budding model builders are asked to apply by submitting a photograph of their favourite LEGO model along with a 100 essay explaining what they would bring to the Junior Construction Panel.

–       Give your children toys designed for the opposite sex

–       Set up mixed play sessions with friends or relatives

–       If you can’t find appropriate toys, write to the manufacturers and ask them why

LEGOLAND Discovery Centre, located in Barton Square at The Trafford Centre, is a unique, indoor attraction featuring over two million LEGO bricks.  Perfect for kids aged three to 10 years, the attraction is like jumping into a giant box of LEGO.

The centre is made up of a series of interactive features to immerse kids into a world where their imagination can run wild with creative inspiration at every turn.  Featuring a whole host of exciting attractions from the LEGO City: Fire Station to an amazing recreation of the North West’s most iconic buildings, the centre is not only fun for LEGO fans young and old, but offers fantastic educational benefits too.

MINILAND, built from more than 1.5 million LEGO bricks, brings the local area to miniature life with moving airships and trains.

The Centre involves just one entry fee, with all attractions included in the cost. Tickets are available online from just £8.10 per person.

The Centre is open from 10am seven days a week. The Centre remains open until 7pm daily, with the last admission at 5pm – see www.LEGOLANDDiscoveryCentre.co.uk for details or follow us on Twitter -http://twitter.com/LDCManchester.